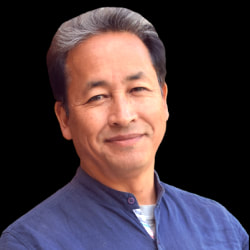 ​Sonam Wangchuk is the founder of Student's Educational & Cultural Movement of Ladakh.

While he was doing his Engineering from Srinagar. He understood the hardships faced by the Ladakhi students in the government schools,95% of the students were failing in their matric exams every year.Therefore,after he finished his graduation in 1988, together with some other like-minded people he started SECMOL .After initially starting with coaching classes to help matric students, they soon realized that for a lasting solution they needed to bring reforms in the education system in the village primary schools. So they launched an education reform movement in collaboration with the government.

​As  an  engineer  Sonam  Wangchuk  has  been  teaching  innovation  at  the  SECMOL  Alternative School, where together with the students he designed and built solar heated  buildings that are low cost, made of earth/mud but maintain +15 C even when the  outside temperature is – 25 C in Ladakhi winters.

In order to solve the water crisis facing mountain regions due to climate change and fast  melting glaciers he invented the Ice Stupa artificial glacier which stores the wasting  stream waters in winter in the form of giant ice cones or stupas and release the water in  late spring as they melt... just when farmers need water.

Sonam Wangchuk has won numerous awards and recognitions , the most laudable are ; the Ramon Magasays Award 2018 and the Rolex Awards for Enterprise in 2016.

To book Sonam Wangchuck for your corporate event, function or conference, simply contact the Celebrity Speakers India team on +918652835000 or write to us - info@celebrityspeakersindia.com