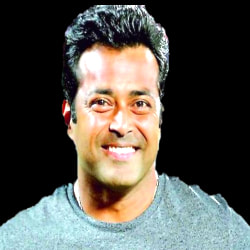 Paes began playing tennis at the age of five, and in 1985 he joined a tennis academy in Chennai). He won the 1990 Wimbledon junior title and was briefly ranked the number one junior player in the world. Paes joined the Indian Davis Cup team in 1990 and turned professional in 1991. In 1996 when he took the men’s singles tennis bronze medal at the Atlanta Olympic Games, he became the first Indian athlete since 1952 to win an individual Olympic medal.
Recognised globally as one of the best tennis players to take the court, Leander Paes' record speaks for himself. Over a career that's spanned more than 25 years, Leander has won trophies and broken records that cannot be eclipsed any time soon. His latest world record, "Maximum Doubles Wins in Davis Cup History", was as recent as 7th April, 2018; showing that Leander has no intentions of slowing down! With that win, he also became one of only 6 players in ATP history to have 750 career doubles wins.

Embodying success, focus, discipline, hard work, mental strength & determination, Leander Paes is a great source of inspiration to people around the globe - no matter what the field.

His great oration skills have left a wide array of audiences captivated, as he shares keen insight from behind the scenes of the world of sports and entertainment.
Whether it's a formal setting with hundreds, or candid one-on-ones, expect laughs, inspirational stories, and discussions on important company and individual goals and visions.

To book Leander Paes for your corporate event, function or conference, simply contact the Celebrity Speakers India team on +918652835000 or write to us - info@celebrityspeakersindia.com