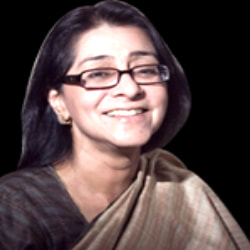 India's most renowned Women leaders. Chairman, Max Financial Services and Advent Private Equity, Former CEO of HSBC India. Naina Lal Kidwai has several firsts to her name. She was the first Indian woman to get an MBA from Harvard in 1982, the first woman president of the Federation of Indian Chambers of Commerce and Industry (Ficci), and the first woman to head a foreign bank’s operations in India.

Naina Lal Kidwai holds an MBA from the Harvard Business School, Boston, USA. She has made regular appearances on listings by Fortune and others of international women in business and is the recipient of awards and honors in India including the Padma Shri for her contribution to Trade and Industry, from the Government of India.

Naina Lal Kidwai started her career in 1982 and until 1994 was at ANZ Grindleys Bank Plc. From 1994 to 2002, she was Vice Chairman and Head of Investment Banking at Morgan Stanley India before moving to HSBC, where she was Chairperson of the HSBC Group of Companies in India and on the Board of HSBC Asia Pacific, until her retirement in December 2015. She was President of the Federation of Indian Chambers of Commerce & Industry (FICCI). She also served for 12 years till 2018 as Non-Executive Director of Nestlé S.A., Vevey, Switzerland.

Her interests in water and the environment are reflected in her engagements with The Shakti Sustainable Energy Foundation, Global Commission on Economy & Climate, and Chair of the FICCI Sustainability, Energy and Water Council as well as Chair of the India Sanitation Coalition. She has authored 3 books including the bestsellers “30 women in Power: Their Voices, Their Stories” and “Survive Or Sink: An Action Agenda for Sanitation, Water, Pollution, and Green Finance”.

​She has received many awards and honours in India and was awarded the Padma Shri, for her contribution to Trade & Industry, from the Government of India in 2007. She has edited two books ‘Contemporary Banking in India’ and ‘30 Women in Power: Their Voices, Their Stories’. Her interest in water and the environment and empowerment of women are reflected in her board positions of not-for-profit institutions like Shakti Sustainable Energy Foundation, The Energy Resources Institute, International Advisory Council of the Inquiry of United Nations Environment Program (UNEP), Commissioner for the Global Commission on Economy & Climate, Chair of FICCI’s Water Mission and FICCI’s Inclusive Governance Council and Chair of the India Sanitation Coalition. She is one of India’s representatives on the BRICS Business Council and India Malaysia CEO Forum, and is on the Governing Boards of the National Council of Applied Economic Research and ICRIER and also a member of Rajasthan Chief Minister’s Advisory Council. She has been a member of the Government of India’s Industry Task Force, the Prime Minister’s Trade and Industry Council, the National Manufacturing Council, the National Trade Council, and on the Working Group on Banking, Financial Sector Legislative Reforms Commission and the National Institute of Bank Management.

To book Naina Lal Kidwai for your corporate event, function or conference, simply contact the Celebrity Speakers India team on +918652835000 or write to us - info@celebrityspeakersindia.com