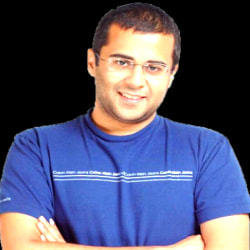 ​Chetan Bhagat is the author of nine blockbuster books. These include seven novels--Five Point Someone (2004), One Night @ the Call Center (2005), The 3 Mistakes of My Life (2008), 2 States (2009), Revolution 2020 (2011), Half Girlfriend (2014) and One Indian Girl (2016) and two non-fiction titles-- What Young India Wants (2012) and Making India Awesome(2015). Chetan's books have remained bestsellers since their release. Four out his five novels have been already adapted into successful Bollywood films and the others are in process of being adapted as well.

The New York Times called him the 'the biggest selling English language novelist in India's history'. Time magazine named him amongst the '100 most influential people in the world' and Fast Company, USA, listed him as one of the world's '100 most creative people in business'. Chetan writes columns for leading English and Hindi newspapers, focusing on youth and national development issues. He is also a motivational speaker and screenplay writer. Chetan quit his international investment banking career in 2009 to devote his entire time to writing and make change happen in the country. He lives in Mumbai with his wife, Anusha, an ex-classmate from IIM-A, and his twin boys, Shyam and Ishaan.

​Chetan is a popular motivational speaker and has spoken at more than 300 organizations in 50 cities around the world. He speaks at corporates, educational institutes, government bodies and volunteer agencies.

His stellar education and diverse professional background makes him the ideal person to share his thoughts and experiences on topics such as leadership, passion, values, team building, motivation, achieving goals etc.

All of his sessions are customized for the particular audience he is addressing.

To book Chetan Bhagat for your corporate event, function or conference, simply contact the Celebrity Speakers India team on +918652835000 or write to us - info@celebrityspeakersindia.com

​The unique point about Chetan Bhagat's ’s talks is that each talk is customized after a con call with Mr. Bhagat and the organizers. Here are few popular topics which he has done in the past :
• Leadership
• Motivation
• Values
• Passion
• Six point to achieving success
• Innovation
• Creativity
• Changing the game