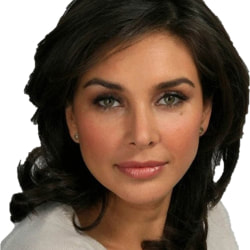 Cross-cultural phenomenon, Lisa Ray is an internationally acclaimed performer, philanthropist and star with a reputation for taking on challenging issue-oriented films. Raised in Canada by an Indian father and Polish mother, Ray was discovered while on vacation in India and went on to become not only one of the most successful cover models and celebrities in India but also an acclaimed, award-winning actress who starred in Canada’s Oscar nominated film, Water, amongst other prestigious credits. Named one of the ‘Ten most beautiful Indian women of the millenium’ by a Times of India poll, Ray cemented her profile as an iconic figure in India before leaving for drama school in London and opportunities around the world.

Along the way, Ray found time along the way to host her own entertainment show in India, filmed a landmark music video for Nusrat Fateh Ali Khan, and became the enduring brand ambassador for Rado Watches. In Canada, Ray has been seen as the co-host of award shows and events such as The Genies, The Giller Prize and The Crystal Awards for Women in Film and Television. In 2009 she was named ‘Trailblazer’ at the Reelworld Film Festival and featured as one of the ’50 Most Beautiful People’ of the country in the Canadian edition of Hello Magazine.

In 2009, Ray attended the Toronto International Film Festival in support of her work in two films. The event marked an important public announcement, in which Ray chose to share her diagnosis of Multiple Myeloma with media and the public. The outpouring of support was immediate and overwhelming. She also started a blog (‘The Yellow Diaries’) to share her cancer experiences. Her forthrightness and humour in navigating a difficult illness have earned her the attention and respect of people from all corners of the world, as well as ‘The Voice Achievers Award, 2009’ and ‘The Hope Award, 2010’. Ray went on to help raise funds for the establishment of the first research chair for Multiple Myeloma at Princess Margaret Hospital in Toronto.

Ray’s philanthropic interests range from taking part in the on-air drive for SickKids Hospital to Ambassador of Plan Canada’s ‘Because I Am A Girl’ campaign, a global movement that supports the rights of girls around the world.

Post a stem cell transplant in February 2010, Ray is now cancer-free and working on her first book. In early 2011 she headlined the national ‘Make Myeloma Matter’ media campaign, filmed a 5 part series for TLC in India and is returning to the stage with Luminato’s ‘Taj’ opposite Kabir Bedi and continues to work in film and television. A passionate advocate for stem cell technology, outspoken public speaker and longtime yoga practitioner, Lisa partners with co-owners Paris and Annette, in 2011 to open Moksha Yoga Brampton.

In 2011 she headlined the national ‘Make Myeloma Matter’ media campaign, filmed a 5-part series for TLC in India, ‘Oh My Gold’ for which she was nominated as ‘Best Host’ at the Asian TV Awards, and returned to the stage with Luminato’s ‘Taj’ opposite Kabir Bedi. Lisa continues to work in film and television, and was a host at the 2011 International Indian Film Academy ‘IIFA Rocks’ fashion and music event, as well as a presenter at the IIFA Awards and the 2011 Giller Prize.
Lisa has recently taken on the role of host on Top Chef Canada. The show, which is Food Network Canada’s top-rated series, and recently wrapped production of its third season.

In 2012, Lisa was named Ambassador for the Pantene Beautiful Lengths Campaign, named one of Canada’s 50 Most Beautiful by Hello Magazine and recognised with a ‘Facing Cancer Together Award of Honour’ by the ‘Look Good Feel Better’ Charitable Program. She was also awarded the ‘Light of India Award for Excellence in Arts and Entertainment’.


suggested speaking topic
A Letter to My Cancer
In this presentation, Lisa speaks about her continuing journey through cancer and how she’s managing to control it, not just by having medications but also by a change in her lifestyle — diet, exercise, stress-release, yoga, and coming at cancer from an integrative method. She uses forthright discussion and humor to tell her story, and help to educate and teach others how to navigate a difficult illness.

To book Lisa Ray for your corporate event, function or conference, simply contact the Celebrity Speakers India team on +918652835000 or write to us - info@celebrityspeakersindia.com