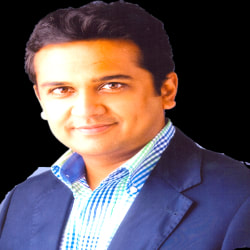 CEO & CO-FOUNDER GAMES2WIN - ‎Successful Digital Serial Entrepreneur who sold his last startup mobile2win to Walt Disney. Power speaker and a lucid as well as engaging presenter with a passion for innovation, out-of-box thinking and business creativity.

​Alok Kejriwal is a serial digital entrepreneur and is currently the CEO and Co-founder of Games2win, his fourth company. Games2win is a global mobile games business that has 150 million game downloads and entertains over 10 million players a month.

In 1998, Alok created contests2win.com – India’s first online contesting site that spearheaded the creation of digital promotions in the world. In 2006 Alok successfully sold his Mobile Startup Mobile2win to Walt Disney and Norwest Venture Partners in China and India respectively. He has successfully raised venture capital from some of the world’s leading VCs such as Softbank China, Siemens Acceleration, Clearstone Venture Partners and Silicon Valley Bank.

Alok is a passionate speaker, presenter and content creator. He has spoken at over one hundred conferences including venues such as the Wharton and Harvard Business Schools, most of the IIMs and IITs in India, The Chopra Foundation conference ‘Sages & Scientists’, The India Today Conclave, Business Today MindRush, TEDx and at numerous corporate and industry events for esteemed organisations like Cognizant, Tata Group, Religare, Deloitte, Bajaj Finserve, Kotak Securities, etc. In 2016 Alok was invited to the Rashtrapati Bhavan to speak on Entrepreneurship in the august company of the President of India.  His expertise is entrepreneurship, starting up and he has a deep understanding of the digital and mobile industry. He is frequently invited by Indian business television channels to share his opinion or debate on a current topic related to startups or technology. In 2017, Alok was a judge in MTV India’s “MTV Dropout Pvt. Ltd” - a six month show that focused on entrepreneurship and Starting Up.

Alok has written over five hundred articles and blogs, some of which have been featured in the Wall Street Journal, The Economic Times and The Economist Blog.

Alok’s presentations are special. His signature style is to present stories via pictures and to skillfully include and engage the audience with the narrative. In each of his presentations Alok presents a real life entrepreneurial and leadership problem that tests and delights attendees.

Outside of work, Alok is an ardent Art of Living Teacher, meditator & spiritual seeker; he attempts to write haiku poetry, blogs passionately and has founded a pro-bono social network for entrepreneurs called therodinhoods.com.

To book Alok Kejriwal for your corporate event, function or conference, simply contact the Celebrity Speakers India team on +918652835000 or write to us - info@celebrityspeakersindia.com

Alok is  a recognized Business Leader, speaker, investor and advisor focused on the impact of emerging technology trends, such as blockchain, artificial intelligence and Digital Marketing  on business and society. Suggested Speaking TopicsNEW KEYNOTE - BLOCKCHAIN Made SimpleAlok has been passionate about Blockchain and been writing about it since 2014. In this unique presentation session, Alok simplifies and demystifies the arcane concepts of Blockchain for the benefit of the audience.

The presentation's content includes: What Blockchain means, how it works and how it benefits its adopters. The session details numerous real-life case studies of Companies using Blockchain in varied industries and applications.

Alok also details a "How to get started" action plan for Blockchain by providing a good to go framework that Companies can adapt and adopt to get their Blockchain strategies immediately fired up.