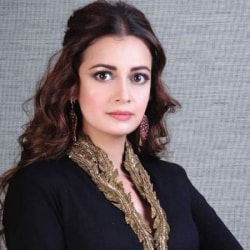 She debuted through Rehnaa Hai Terre Dil Mein, which developed a cult following among Indian youth. She then appeared in movies such as Dum, Deewanapan, Tumko Na Bhool Paayenge, Tumsa Nahin Dekha – A Love Story, Parineeta, Dus, Lage Raho Munnabhai and Salam Mumbai. In 2018, she appeared as Sanjay Dutt's wife Manyata Dutt in the biopic Sanju, which ranks among the highest grossing Indian films.

She appeared in the ZEE5 web series Kaafir. Set in Kashmir, she starred opposite Mohit Raina in the series. She has also produced a sitcom web series titled Mind the Malhotras, streaming on Amazon Prime Video. The series stars Cyrus Sahukar and Mini Mathur in the lead.

She has written articles for Hindustan Times and other publications.

In December 2019 she announced she was forming a new production house "One India Stories" to create original content.

Mirza has been involved with Cancer Patients Aid Association and Spastics Society of India, and has worked extensively with the government of Andhra Pradesh to spread HIV awareness, prevention of female foeticide, PETA, CRY and most recently the NDTV Greenathon – an effort to find tangible solutions against pollution and the book, "Deke Dheko" by Radio Mirchi (a campaign initiated to collect books for underprivileged children). She is on the board of the Coca-Cola foundation that works towards development in rural India. She is associated with campaigns such as Sanctuary Asia's Leave Me Alone and Female Foeticide.

In 2010 she adopted two cheetah cubs at the Prince of Wales zoological park in Lucknow.[16][17]

Mirza, along with Aamir Khan, publicly expressed support for the Narmada Bachao Andolan, a group protesting the building of a dam. This aroused the ire of political activists from the Bharatiya Janata Party, who led a protest march against the actress.[18] She won the Green Award at IIFA 2012 for spreading awareness about environment-related issues.

Along with these, Mirza has endorsed The Body Shop for their stand on a ban on animal testing and propagation of recycled packaging and natural products. She is the Eco-Ambassador for Panasonic.

Mirza has been felicitated at award functions for her active involvement in social and environmental issues.

She has been named the ambassador for the Swachh Bharat Mission's youth-based 'Swachh Saathi' programme. As an ambassador, the actress would interact with school and college students from across the country through awareness sessions, community cleaning activities and motivational videos.

She joined Save The Children India as their first ever artist ambassador.

On World Environment Day 2017, she was appointed brand ambassador for the Wildlife Trust of India. She has lent her support to WTI's wildlife conservation endeavours for several years and is a founder-member of the organization's Club Nature initiative, also supporting a campaign to raise awareness about the shrinking space for wild elephants in the country.

She was also appointed as the UN Environment's Goodwill Ambassador for India.

To book Diya Mirza for your corporate event, function or conference, simply contact the Celebrity Speakers India team on +918652835000 or write to us - info@celebrityspeakersindia.com