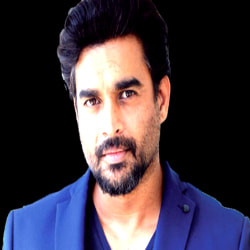 A popular Indian actor, writer and film producer. Recipient of two Filmfare Awards, he is amongst the few Indian actors with a pan-Indian appeal, appearing in over 75 films in seven different languages.

​R Madhavan is a popular Indian actor, writer and film producer. Recipient of two Filmfare Awards, he is amongst the few Indian actors with a pan-Indian appeal, appearing in over 75 films in seven different languages.

In 2004, he earned critical acclaim for his performance as the antagonist in the multi-starrer Aayutha Ezhuthu, securing him his first Filmfare Award for the intense portrayal of a rogue. Madhavan also actively pursued a career in Hindi films appearing in three highly successful productions, Rakeysh Omprakash Mehra’s Rang De Basanti (2006), Mani Ratnam’s biopic Guru (2007) and Rajkumar Hirani’s 3 Idiots (2009), which went on to become the highest grossing Indian film of all time. He simultaneously worked on Tamil films, gaining critical acclaim for his portrayal of a vigilante in Evano Oruvan (2007) and for the successful bilingual horror film, Yavarum Nalam (2009).

In addition to his acting career, Madhavan has worked as a writer and producer on his films, hosted television programmes and has been a prominent celebrity endorser for brands. Madhavan is noted for his philanthropic activities and promotes various causes such as environment, health and education. He is particularly vocal about the protection of animals and was awarded PETA’s Person of the Year recognition in 2012.”

​After graduating in electronics from Rajaram College, Kolhapur, Madhavan was chosen as a cultural ambassador to represent India in Canada. When he was 22, he became the Maharashtra Best Cadet. This award presented before him a unique opportunity to travel to England as a NCC Cadet along with three other cadets. Being the best cadet in Maharashtra, Madhavan got the privilege of training with the Royal Army, the Navy and the Air Force of England.

Madhavan had the ambition of joining the Air Force (this dream of his later became true when he played the role of an Indian Air Force Pilot in the film Rang De Basanti). Due to problems with the age, Madhavan could not make it to the Air Force and diverted his attention to learn various courses on Public Speaking. In the year 1992, Madhavan was chosen to represent India at the Young Businessman Conference in Tokyo, Japan. The courses in public speaking later helped Madhavan try his luck in the film industry.

Madhavan is a vegetarian and therefore endorses PETA. In 2006, he was voted as the cutest male vegetarian. He is also part of the charitable organization, The Banyan. In 2010, he and the entire cast and crew of 3 Idiots raised INR 25 lakhs to renovate a school in Leh that was damaged by flash floods. Incidentally this was the same school where a part of the movie was shot. He is one of the few actors who have been successful in establishing himself well both in the North as well as down South. He is also one of the few actors who do not have a six pack and are happy about it.

As A speaker R. Madhavan delivers Talks Covering subjects like situational awareness among others, Aimed at inspiring people to achieve extraordinary things in life. ​Talks By R. Madhavan Will Inspire You To Leave Your Comfort Zone In Pursuit Of Success!

To book R. Madhavan for your corporate event, function or conference, simply contact the Celebrity Speakers India team on +918652835000 or write to us - info@celebrityspeakersindia.com