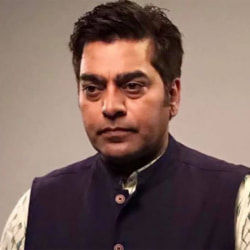 Ashutosh Rana, is an Indian actor, working in Hindi, Marathi, Telugu, Kannada and Tamil film. He has also worked in Indian television shows. He has also won two Filmfare Awards for Dushman and Sangharsh.

​He was raised in MP and in his early days, he played Ravan’s role in various stage shows as well as Ram Leela. To hone his acting schools, he enrolled at the famous National School of Drama in Delhi. After he completed his acting course, his guruji named Dadda Ji advised him to go to Mumbai and meet the veteran filmmaker Mahesh Bhatt.

He began his acting career through the famous television series Swabhimaan in the year 1995 which was offered to him by Mahesh Bhatt. After which, he was seen in a range of Doordarshan series such as Dhund, Farz, Waris, and Saazish among others. In addition to acting, he has also hosted the shows like Baazi Kiski and Sarkaar Ki Duniya.

Besides the small screen, this talented actor has lit up the silver screen with some scintillating performances that he has given over the years. His Bollywood career started with a brief role in the film called Sanshodhan in the year 1996. He rose to prominence after his performance in Mukesh Bhatt’s Psychological thriller film called Dushman in the year 1998. His performance in this film left the audiences numb and was fair to him that he won various awards for his performance. The following year, he gave an equally good performance in Tanuja Chandra’s Sangharsh. By now, he was a most sought after the villain of the silver screen. In addition to negative, he also played some brilliant supporting roles as well in films such as Kasoor, Humpty Sharma Ki Dulhania, and Brothers among others.

Ashutosh Rana has acted in 7 regional films like Marathi, Kannada, Tamil, and Telugu among others. His intensity and performance in regional films too was same and has won various fans in the southern film industry as well.

To book Ashutosh Rana for your corporate event, function or conference, simply contact the Celebrity Speakers India team on +918652835000 or write to us - info@celebrityspeakersindia.com