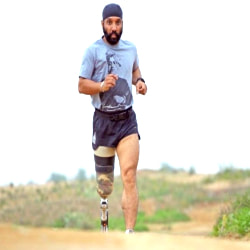 Former Officer of the Indian Army. He is a Kargil War veteran and is known as the India's first blade runner.

Major DP Singh is a retired officer of the Indian Army. He is a Kargil War veteran and is known as the India's first blade runner. After his amputation, he gradually started running using a prosthetic limb and has run in 21 marathons in his running career. The Limca Book of Records added his name to their "People of the Year 2016" list

Some of his achievements include:

• National Award for the empowerment of Persons with Disabilities 2018, by Govt of India, as a Role Model Category in the category of multiple disabilities

• Ambassador for the ‘Year of Disabled’ celebration of Indian Army, 2018

• Part of the historical committee set up by Mr Mannohar Parrikar, the then Defence Minister, to reduce litigation and grievances of all employees under Ministry of Defence, 2014

• Face of ‘More to give” Campaign of NDTV, pledged his body organs for donation

• Indian Brand Ambassador for “Wings for Life” World run, an across the world Social initiative of Red Bull, for Cancer awareness

• Limca Record for being 1st Blade Runner of India in 2011

• DNA Exemplar award by ICICI Bank (given to role models)

To book Major D.P. Singh for your corporate event, function or conference, simply contact the Celebrity Speakers India team on +918652835000 or write to us - info@celebrityspeakersindia.com